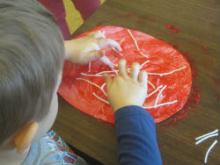 One of the things your preschool child will be exposed to is the alphabet. This is done through song, crafts and play. With the youngest of the preschoolers in Room 3, the focus is mainly on the sound of the letter and the shape of the letter. More focus will be put on learning to write the letter as the children develop the necessary ability to grasp and control a pencil.

On this day the children were focusing on the letter "P." One group of children was busy making pizza. The teacher gave each child a white piece of paper shaped like a circle. She then gave them red paint and asked them what the red paint would be on their pizza. The kids knew it was to be the sauce. After they had finished painting the sauce on their pizza, she gave them pieces of white yarn cut into small pieces. This was the cheese for their pizza. The children needed to separate single pieces of yarn and place them on the sauce paint. Viola, cheese pizza!

Another group of children were playing with the food in home living. There were plates of pizza and other food being created and shared with each other. The teacher with this group talked with the children about the food they had on their plates.

Now let's see what learning they were exposed to through these activities. In the pizza art group, the children were learning how to follow directions, how to put together a pizza, identifying colors and the shape of the circle, using and controlling the muscles in their fingers and hands to paint and separate the yarn into individual pieces. They were hearing the letter "P" in the word pizza. The children playing in home living were also hearing the word pizza and the letter "P" sound. They were sharing food and working on their social skills.

Through play the children were exposed to the letter "P." These children were engaged in an activity that allowed them to work on their small muscle control which will be a basis for actually writing the letter P at a later date. At Shepherd's Care we believe that if children are actively engaged in an activity they are learning. I hope you are able to see how this philosophy is being carried out in Room 3.