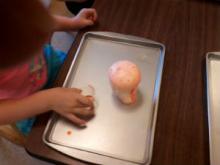 Shepherd's Care doesn't run on a school year calendar, but that didn't stop the Room 6 staff from opening their year with a great "Preschool Fun" theme as they welcomed a number of new little ones from Room 3.

On this particular day, most of the children were very engaged in making bracelets using pony beads. The children chose which beads they wanted to use, the order to put them on their pipecleaner, deciding when they were done and finally deciding who the bracelet was for. The teachers only interaction with the children during this activity was twisting the pipecleaner ends together in an appropriate length for mom or for the child. Some of the children were making patterns or using a lot of a given color of beads. I observed one of the girls dropping a bead on the floor and another child offering to pick it up for her. So what kind of learning did they experience? They exercised their small motor pincer grasp, experienced a circle shape, they identified colors, they worked together and helped each other. They practiced making decisions. According to the teacher these same children made more bracelets in the afternoon. She said some made as many as 10 bracelets! That's how you can tell they are having fun.

This independent activity was balanced out by a group science activity. The children watched with awe as the teacher added some baking soda to the colored vinegar mixture and resulted in bubbles overflowing the cup (like a volcano). I remember one little guy saying it looked like a smoothie. In an effort to understand the unknown, he related it to something he knew and added it to his knowledge base. To follow up this activity the children had the opportunity to try this for themselves. With a smaller version of cup of vinegar and a spoon full of baking soda, the children made their own mini volcanos. Everyone of them was absoutely amazed.

In addition the children had an opportunity to explore the sound of the letter "A" as they played with a variety of items starting with the "A" sound. The teacher would ask them what they found (a Captain America figure) and they reinforce with them that America starts with "A".

I like to think of preschool as being an intentionally planned environment where the children learn while having fun. Yes, learning can be fun! We believe that if the children are actively engaged in what they are doing they will be learning.

Please let me know if you have any ideas about other fun learning activities your preschooler enjoys.