The Sense of Hearing 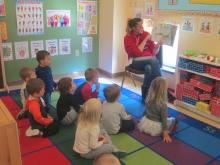 Hey, did you hear that? No I guess you probably didn't, but the preschoolers in Room 3 did. I had an opportunity last week to observe an excellent lesson focusing on the sense of hearing. From story time to a game, the children were actively engaged in activities that used their sense of hearing.

The teacher was reading a book filled with confusing animal sounds. I didn't catch the whole story but it was peppered with animals who were making the wrong sounds. The kids were eager to correct them with the proper animal sound. They really seemed to be enjoying it. Next the teacher set up a group of small plastic farm animals and began singing...you guessed it,  Old McDonald Had a Farm. The kids easily knew what animal was coming next as the teacher pointed at it. Since animal sounds were their speciality they were ready for the sound that came next in the song.

Using a little technology isn't a bad thing. Using one of the classroom tablets, the teacher pulled up pictures of animals (both farm and wild) and let the children listen to the animal sounds without seeing the picture of the animal. They did very well in identifying the animal that made that sound. The teacher then turned the tablet around so they could see the animal who made that sound.

Lastly, she asked all the kids to put their heads down on the floor and then gently tapped one child who stood up and said a few words. Without looking up, the remaining kids were asked to identify the child whose voice they heard. Of course, they were correct in their guesses.

Earlier I mentioned this was an excellent lesson. In my opinion it was because the teacher alternated having the kids make the animal sounds and then use their sense of hearing to identify the animal sounds. The children needed to use critical thinking to know that the animal sounds in the book were confused and to then make the proper animal sound. It was also pretty silly and they were laughing. During the song, the children needed to look at the plastic animal the teacher pointed at and make the proper sound. In the activity with the tablet, the children needed to listen carefully to differentiate between some of the sounds that were very similar as in lamb and goat. While not everyone got the goat sound, most of them did. Who knew a goat sounded so much like a lamb? Finally, the teacher pointed out that we all sound differently and highlighted that with her identify the child's voice game.

I hope you can see the active learning that was present in this lesson. This group of young preschoolers were very attentive during all of these activities! The only thing that might have been better would have been a live cow in the classroom and I'm guessing Aislinn would have frowned on that! Next time you are at a petting zoo see how many animal sounds your child knows.