The Wonder of Shadows 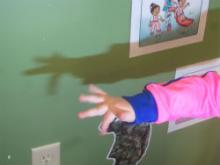 We just finished celebrating, if can call it that, Groundhog's Day. And I'm sure you heard that Phil saw his shadow mearning we will have six more weeks of winter. Supposedly his shadow sent him skittering back underground. Shadows can be frightening and they can be fun. In Room 6 the children played with shadows and hopefully had fun doing so.

Susanne shared with me an activity she did with the Room 6 preschoolers. She set up an overhead projector and placed classroom objects on it and let the kids guess the object by looking at the shadow of the object on the classroom wall. And then she invited the kids do it by themselves. The resulting fun and discovery was full of AHA! moments. The kids experimented with how to lay the object on the screen to get the best shadow, i.e., should it be laying down or standing up. The discovered which objects made interesting shapes, i.e., a kleenex box vs. a plastic dinosaur.

One of the teahers took a flashlight and showed the children how she could make shadow puppets using her fingers. The kids were quite taken wiith this acctivity and were given chances to try making shadows of their own.

Other pieces of learning I observed included the children writing their name of their groundhog picture. One child said he didn't know how to write his name. With a little encouragement from the teacher, he gave it a try. But when he came to making an "R" he didn't now how to form it. Another child stepped in and showed him how to do ti. This is an example of how children can learn from each other.

Watching children get it, observing that AHA! moment, is very rewarding. Share with me some AHA! moments you have observed with your child.